A photo can’t make up for missed opportunity

The championship was the first for the Bulldog girls on the track since 1987.

Even with such an outstanding team, the second day of the meet in Kalispell was filled with high drama. Butte High scored 85 team points, edging Billings Senior by just two points.

It was such a great time for the Mining City. Tom Roberts, the head coach, is still smiling from the feather in the cap of a great career. Universal Athletic was selling state championship gear, and Butte was once again the “City of Champions.”

A little more than a month later, the hometown heroes took a victorious ride in the Fourth of July parade.

Paul Panisko and I covered the parade for KBOW radio. Paul was giving the play by play, while I was charged with wandering into the parade for quick interviews.

The Bulldogs were approaching when I suddenly became distracted. A Shriner came roaring up in one of those tiny cars, and I hit him with a series of hard-hitting questions.

“Could you possibly still let me drive if I don’t become a Shriner?”

Sure enough, I turned my head to see the champions fading off into the distance on Harrison Avenue.

We made a few pleas for the parade to back up so we could get a shot to talk to some of the athletes from the great team, but it was no use.

I missed my chance.

What could I have possibly added to the great story of the 2009 state champion Bulldogs? Probably nothing, but I sure would have liked to have given it a shot.

With our comic genius and uncanny timing, Paul and I made it a really fun time on the radio. But until last Tuesday, I had long considered it the biggest missed opportunity of my journalistic career.

Last week is when I saw a picture I took of Avery and Alivia Cox running hand-in-hand running down the Charlie Merrifield Track.

I was taking pictures at the Montana Special Olympics Area Games, and I accidentally got probably the best picture I will ever take.

Avery is a 13-year-old seventh grader at East Middle School. Alivia is a 10-year-old fourth grader who was proudly representing West Elementary School.

Alivia, who was born with Down syndrome, was very nervous as she lined up for the 100-meter dash. When the gun was fired and the crowd began to cheer loudly for the race, Alivia was afraid to run.

That’s when Avery stepped up, grabbing a hold of Alivia’s hand. Then the two sisters raced to the finish line to the roar of the crowd.

A smile of pure joy from Alivia lights the photograph, and it tells way more than 1,000 words. 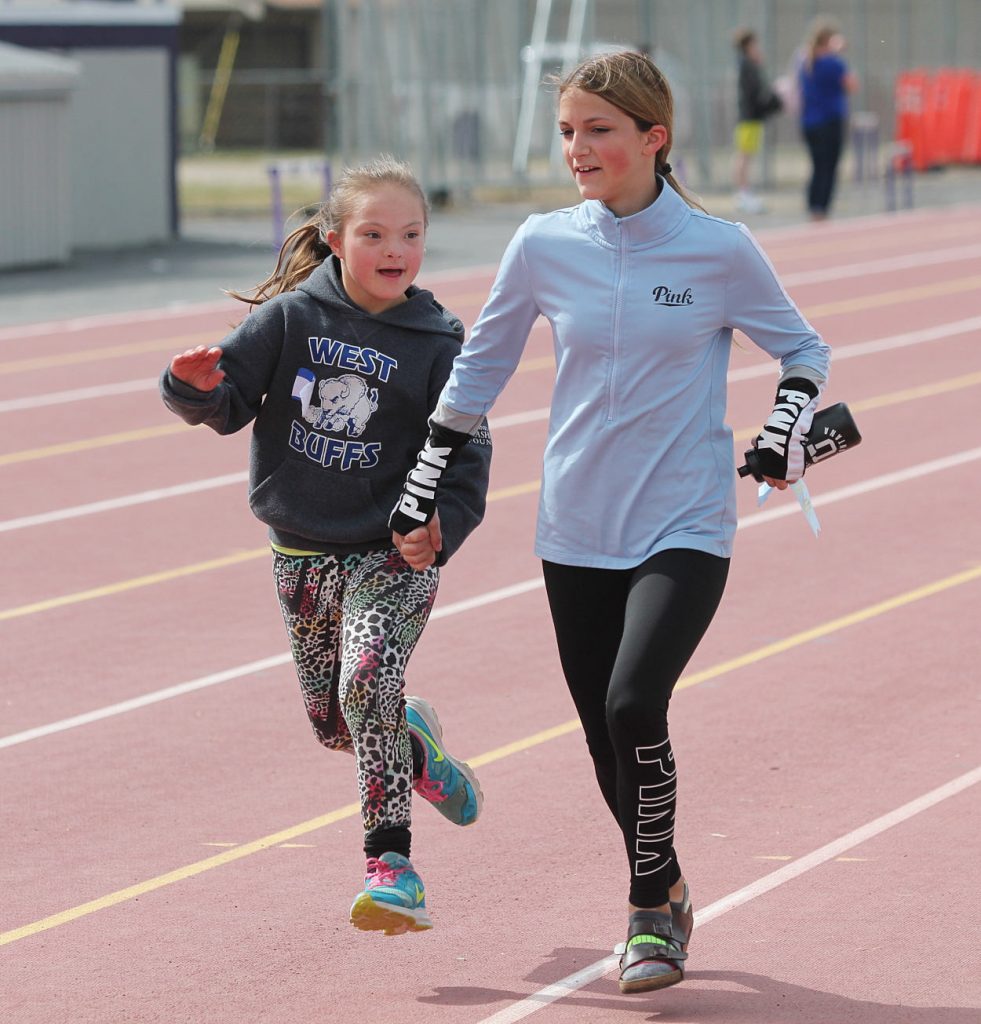 Alivia Cox, left, runs the 100-meter dash with her sister Avery May 14 at the Charlie Merrifield Track.

It was one of those moments that you would expect to see in a Hallmark movie. It was almost too good to be true.

For Tara Cox, the mother of the two inspiring girls, the race was confirmation that the struggles of the past decade were worth it.

“Life is not always easy when you have a child with special needs,” Tara told me later. “A lot of the time I find myself questioning if I’m doing enough or if I’m doing it right, especially when it comes to making sure her siblings understand what it means to have Down Syndrome. This is something Avery actually used to struggle with.

“However, it’s moments like the one captured in the photo when you realize that you are doing something right. The moment was special for them both.”

I didn’t get the chance to interview Avery or Alivia after the race. That is because I did not realize what I had taken until I got home and put the photo card into my computer.

Yep, I was too busy gabbing as I took photos of heat after heat of Special Olympians racing down the track.

I took a few shots of runners leading Alivia’s heat before turning back into one of the many conversations I had on that happy day. Out of the corner of my eye I saw what I thought was just two more Olympians running way behind the pack.

I quickly pointed the camera in the direction of the runners in time to snap one shot. As luck would have it, it was in perfect focus.

When that picture hit my computer screen I wanted to cry for a couple of reasons. One, you are not human if you don’t get teary eyed when you see the photo.

Two, I knew a story of a lifetime ran right past me and I didn’t notice.

Had I seen what my camera had just captured, I would have surely sprinted to the finish line to talk to Avery and Olivia. I would have had the chance to write the kind of story that every writer lives for.

Instead, the story slipped through my fingers and I didn’t even notice.

Sure, I’ve been told I shouldn’t beat myself up. I should just be happy with the photo.

Sometimes, I’m told, a photo says it all, and there was probably nothing any writer could possibly add to the story Avery and Alivia running hand-in-hand down the Charlie Merrifield Track.

That is probably true. But I sure as heck would have liked to have given it a shot.

— Bill Foley writes a column that appears Tuesdays on ButteSports.com. Email him at foley@buttesports.com. Follow him at twitter.com/Foles74. 1 comment