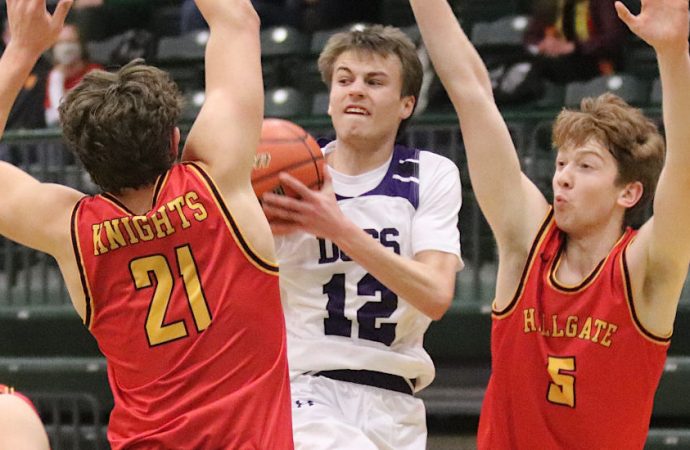 The Butte High Bulldogs were about to celebrate one of their biggest wins of the century Friday night at the Butte Civic Center.

Beckett Arthur, however, had another idea.

The Missoula Hellgate senior hit a pull-up 3-pointer as time expired to give the defending Class AA state champion Knights a 66-65 overtime win over the Bulldogs.

The swish that capped a comeback from a 12-point deficit, ignited at Hellgate celebration on the court. It carried to the hallway, where the voices of celebration could be heard long after the final buzzer.

“It’s really, really disappointing,” Butte High coach Matt Luedke said. “It sucks for the guys to give a great effort like that and not finish.”

The final score was the first time that Hellgate led since midway through the first quarter. The Bulldogs led by as much as 12 points before leading 34-29 at halftime and 49-41 after three quarters.

The Bulldogs (2-3), though, missed six free throws over the final 13 minutes of play. That included missing the front end a one and one two times.

“We played hard, and I think we played good enough to win,” Luedtke said. “But we’ve got to execute down the stretch.”

Butte’s Kenley Leary holds the ball as the final seconds of the first quarter tick down. (Bill Foley photo)

The final minutes were filled with heroic moments from players on both sides.

The Bulldogs led 55-45 when Kenley Leary sank a 3-poitner with 4 minutes, 32 seconds left in regulation. That gave the home crowd the feel of an imminent victory.

Hellgate (4-1), though, turned up the heat with an aggressive press, and Butte High did not handle it well. That results in an 11-1 Hellgate run.

Josh Wade drove for a bucket to tie the game at 56 with 58 seconds left in the game.

Cayve LaRance answered with two of his won with 5.5 ticks left.

A long pass to a streaking Jake Olson was just a little too high, and the game went to the extra 5 minutes tied at 58.

Olson, a senior who will play football at the University of Montana, scored inside to give Butte High the lead. LaRance drove to tie the game on the other end.

Olson hit the first free toss, but the second bounced out. The Knights hurried down the court, and Arthur pulled up for the heartbreaker.

“It was a hell of a last shot there,” Luedtke said. “We didn’t defend it well, and he got a real clean look. It was still a tough shot to make.”

The Butte coach credited the Knights for finding a way to win.

“They’re well coached. Jeff (Hays) is one of the best in the business, and obviously he’s got his dad (Eric) over their assisting him,” Luedtke said. “Those guys are great basketball minds. Their kids always play hard, and they’ve got championship pedigree. The kid who hit the game winner there was I think a starter on their team that went undefeated last year.”

During the 2019-20 season, the Knights beat the Bulldogs badly in both meetings, winning by a combined 83 points. For so much of Friday’s game, it looked as if the Bulldogs were going to pull off one of the all-time turnarounds.

The lead changed hands nine times before the Bulldogs closed the first quarter with a 20-17 lead.

That run came a 3-poitner from Wade and two more from LaRance.

Hellgate rallied to tie the game at 41, when LaRance scored to cap a 9-0 stretch with 2:17 left in the third quarter. Kelly, though, drove for a hoop that started an 8-0 Butte run to close the third.

Butte High was absolutely rolling with contributions from all eight players to hit the floor.

“Everybody was great,” Luedtke said. “Jackie Moon stepped in there and was awesome. Kenley hit a couple of big threes. The big three in the corner in overtime, I thought that was the dagger.”

“Jackie Moon,” is junior Kooper Klobucar, whose afro and No. 33 makes him resemble Will Farrell’s character in the movie “Semi-Pro.” He will likely see even more time because of his solid production and the fact that sophomore Eric Loos transferred to Butte Central on Monday.

Olson scored 14 points to lead three Bulldogs in double figures. Cael Stenson scored 13, while Kelly finished with 10. Also, the Bulldogs got nine from Leary, eight from Blake Drakos, six from Zach Merrifield, three from Klobucar and two from Mikey O’Dell.

LaRance and Wade each finished with 22 to lead the Knights, who won for the 29th time in 30 games. Arthur scored 11, Ian Finch tossed in six, Tommy Nilson scored four, and Kinch scored one.

Luedtke said his team can learn from this tough loss. He compared it to the Bulldogs’ season-opening overtime loss at Dillon last season.

“They definitely know how to win,” Luedtke said of the Knights. “When you play against teams that have won and are used to winning, they find a way to win.

“When you’re trying get wins and trying to learn how to win and be champions, you’ve got to go through some struggles like that. The only way to learn in those situations is actually have them.”

Friday marked Butte High’s only game of the week. The Bulldogs don’t get the chance to wipe the bitter taste out of their mouths until Missoula Big Sky comes to town on Thursday.

“I feel bad for the guys,” Luedtke said. “But if we don’t like to feel that way, we’re going to have to learn how to finish those games.”