But the Orediggers certainly took over possession of the driver’s seat on the road to the post season.

Martha Dembek reached a career high with 29 points to lead the way as the Orediggers held off a hard-charging Western team. The Orediggers led by as many as 16 points in the second half. 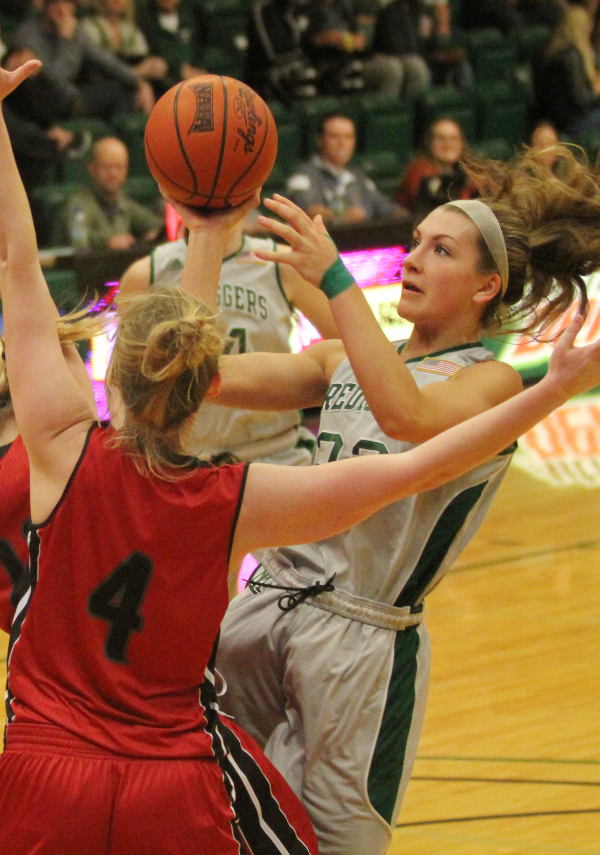 Ordigger Martha Dembek gets off a shot over Montana Western’s Dani Baker.

“It feels so good to get it for Shayla,” Dembek said. “She’s been there through it all. She loves basketball so much, and it just breaks my heart that she can’t be out there with us. That win was for her for sure.”

A bucket by Kaylynn Coverdell put the Orediggers up for good at 12-11 with 5 minutes, 41 seconds left in the half. The Orediggers led by 50-34 late in the third quarter before the Bulldogs mounted a rally that saw Western pull within 62-61 on a Kaye Bignell bucket with 3:39 left.

The Orediggers, though, kept coming up with answers to hold off their rival down the stretch.

The first answer was a three-point play by Dembek, who is averaging 19.5 points per game in February. That followed a January that was very unlike Dembek.

“I’m proud of how Martha came out tonight,” Montana Tech coach Carly VanDyke-Sanon said. “It’s good to have her back.”

The win puts the Orediggers at 4-12 in conference and 13-14 overall. The Orediggers now have a one-game lead over the Bulldogs for the final playoff spot with two games remaining.

“We’re hunting for a playoff spot, and we got two big wins this weekend,” said VanDyke-Sanon, whose Orediggers knocked off Rocky Mountain College on Thursday. “Our defense won us both of those, and that’s what we needed.”

Freshman Sammy McGree, who was averaging a team-leading 12.6 points per game, is also on the bench with a season-ending knee injury. VanDyke-Sanon said the Orediggers miss McGree and Mack.

“We had a little dry spell offensively when they went zone, but that’s something we can get fixed,” the coach said. “It’s a little bit different when teams zone us when we don’t have Sammy out there or Shayla.”

Dembek also said defense has been the key to Tech’s last-season resurgence.

“We’re clicking,” she said. “Our defense has gotten a lot better these last couple of games. It all starts with our defense because that creates our offense.”

Tech closes with games at the University of Great Falls and MSU-Northern next week. Western (3-13, 13-15) will be at home to take on Carroll College and Rocky Mountain College.

In case of a tie, the Bulldogs have hold the tiebreaker because they took two out of three against the Orediggers.

Dembek said it was nice that the Orediggers now control their own destiny. However, she said the team is taking nothing for granted.

“It all depends on next week’s games,” she said. “I know Western has a couple of games that they could easily win.”