Butte Central stayed steady in a physical boys’ basketball test Saturday, adhering to plan while posting a 50-34 victory over Corvallis in a Class A Southwestern Conference game at the Maroon Activities Center.

“As well as we played, we still had a lot of turnovers,” Brodie Kelly, head coach of the Maroons, said with a positive glance ahead in knowing the team can still be even better. “Some are just mental, lazy things like dragging a foot on the pivot.

“But I thought we did a nice job on defense today. Our defense was grinding stuff out in the fourth quarter. I thought it was important (in the second half) when they were getting into the lane that, when we got our sixth team foul, our butts got lower and we got better on defense. It was a long time before we picked up that seventh foul.” 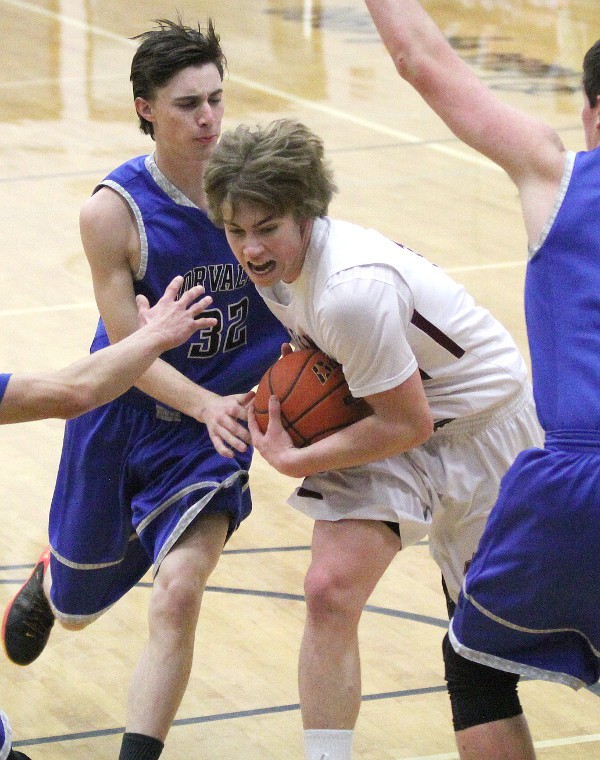 The check on defense helped stem the Corvallis tide, too, as the Blue Devils powered out of the locker room to cut a 23-15 margin to two points, 27-25, by blasting through the scoring lanes.

The surge occurred in the middle part of the third quarter on a seven-point spree. Chase Jessop started it with a drive, then Tyler Nixon sank three of four free throws and Tannon Allred capped it with a rebound putback

The BC boys put the brakes on Corvallis right there. McGree lifted a feed from Johnston to the hoop and then meshed a pair of foul shots. A trade of baskets finished the period and Butte Central took a 33-27 lead into the fourth frame.

The Maroons then scored the first nine points of the fourth quarter and sat more comfortably at 42-27.

“The play of the game, I thought was when Sam got the inbounds play off a steal and hit the 3,” Kelly said. “That was the game-changer.”

It happened right after McGree had tossed in another layup off a Johnston pass. Tanner Kump intercepted the Blue Devils’ inbounds pass and threw to Johnston, who canned a wide-open 3-pointer from the corner. The BC lead was 38-27 with 6 minutes, 47 seconds to go. 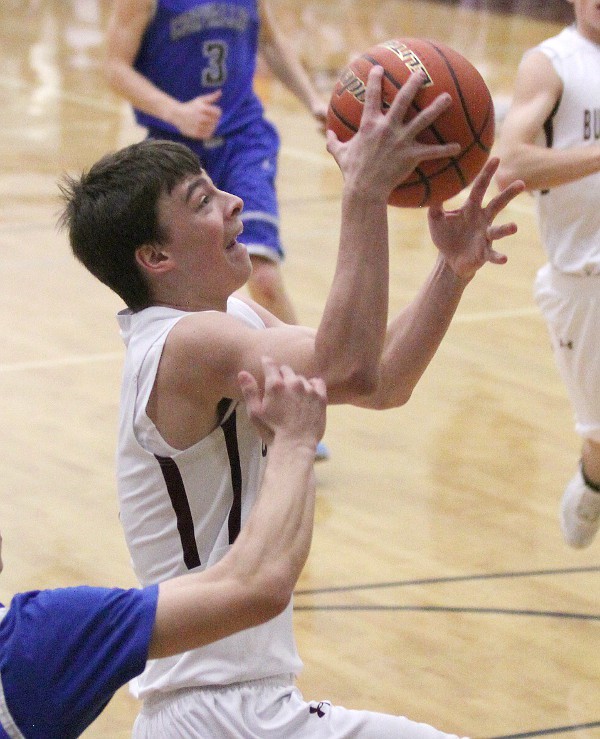 After Corvallis failed to convert on its next possession, Johnston flipped the ball across the key to Cade Holter, who pushed in the layup. Johnston finished the nine-point run by caging two charity tries the next trip downcourt.

Spectator focus, if not participants’ focus, was distracted some in the final period when a Blue Devil fan walked out onto the court to contest the reffing of the game, and was ordered by the officials to leave the arena. A brief altercation reportedly took place in the MAC lobby as the man was being escorted away before all order was restored.

The advantage the Maroons built proved to be insurmountable. Corvallis missed four free throws to hurt itself in the waning moments, failing to make a move on BC, which was successful on enough foul shots to maintain command.

“I thought it was a pretty solid effort,” Kelly said. “It was the style of game we needed to play. We moved the ball pretty well and we grinded out some stops. In the fourth quarter, we did a good job of stringing some stops together.”

Butte Central was never behind. The Maroons shot to a 4-0 advantage to start the game as Riley Richardson and Harper tallied buckets. After Jessop responded for the Blue Devils with a steal-for-layup, McGree chained five consecutive points. Butte Central finished the period in possession of a 12-4 lead.

The teams played evenly in the second frame. Butte Central grew its lead to 11 points, 19-8, on a basket-and-one by Harper. Corvallis came back on a pair of Jessop 3-pointers, giving him three for the frame on the way to four for the game.

The Maroons added to their advantage to be in front by 23-15 at halftime.

The win was BC’s second this week, having outlasted Class AA Helena High 56-50 in overtime Thursday night in Helena.

“It was a really good week after losing three games in a row,” Kelly said. “It’s a credit to the kids. We had really good practices this week. The kids understand our offense better, now.

“Corvallis played extremely hard. All of their kids had a ton of effort and I think that’s what made for a scrappy kind of game.”

Johnston had eight points in the win as Butte Central went to 2-2 in conference games and 6-3 overall. The game ended the first half of the league season. Kump, Richardson and Holter each scored two points. Archie Petritz and Tyler Kump also played. The Maroons will play at Stevensville on Thursday in a conference counter.

The Blue Devils lost to Class AA Missoula Hellgate Thursday night before the defeat Saturday sent them to 0-3 in Southwestern A play and 3-6 for the season. Jessop led them with 16 points and Nixon scored 10. Spencer Jessop came off the bench to pull down a game-high eight rebounds.