Kloie Thatcher was the igniter and the explosion for Butte Central Thursday night as she drilled seven 3-point baskets while scoring 26 points in a 65-52 non-conference high school girls’ basketball victory over Class AA Helena High at the Maroon Activities Center.

The win kept the Maroons unbeaten this season at 8-0 while the loss was only the second for the Class AA Helena High power.

Thatcher’s first 3-pointer cut a 4-0 Bengal lead to a point. Helena High grew the lead back to 12-7 after a trey by Sam Holman with 2 minutes, 23 seconds left in the first quarter. Butte Central then went on an 8-0 run as Thatcher converted a three-point play, Emily St. John drove for a hoop and Thatcher buried a 3-pointer.

The lead held. The Maroons never trailed again as Thatcher scored 15 points in the opening frame on the way to a 20-point first half.

“It’s just been in my head lately that I need to do more (for the team),” Thatcher said about her scorching start. “I’ve been going to the gym more, going earlier so I can get in more shooting.

“I think it was very important that we got a big lead early. We knew going into this game that we needed to be together and we needed more intensity.” 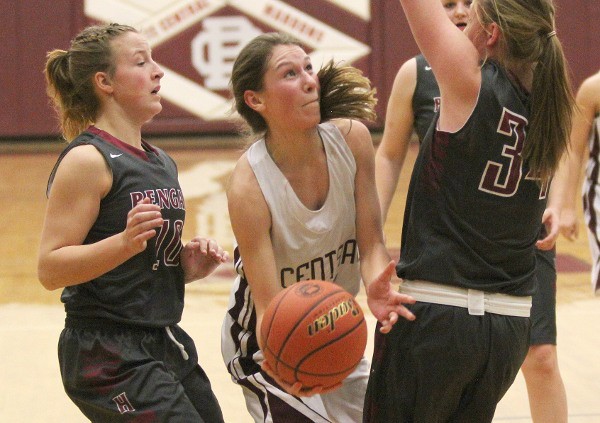 Maroon Emily St. John scoops in a shot between a trio of Helena High defenders.

The BC girls led 20-13 after the first quarter and then, after a 3-pointer by the Bengals’ Hailey Crawford, sizzled for 20 unanswered points. Emily St. John started the spree with two free throws and multiple points by Pica, Mollie Peoples and St. John followed. The eruption took the Maroons to a 42-21 halftime advantage.

“I thought our kids did a really great job getting Kloie the ball when she was hot,” BC head coach Meg Murphy said. “That’s our other guards (St. John, Peoples, Kate Ossello, Taylor Wahl) knowing who to get the ball to.

“For Kloie, this was a big boost for her. She’s been focused all week. She decided to put her mind to it. She did a nice job, too, on defense and did a good job dishing.”

Thatcher had been held to no or only a few points in some of Butte Central’s more recent outings.

The Bengals clamped more coverage on her in the second half, but the Maroons played heady basketball and kept their lead. They took a 51-34 cushion into the fourth quarter.

Helena High tried to shoot back into the game from long distance or trying to draw three-point plays through the fourth quarter. The teams combined for 18 made 3-pointers for the game, and Helena High’s Kendra Kloker canned five of them.

An 11-point difference was all the closer the Helena club could come to the lead the rest of the way and that was reached on a Taelyr Krantz basket that made the score 63-52 with 43 seconds remaining in the game. 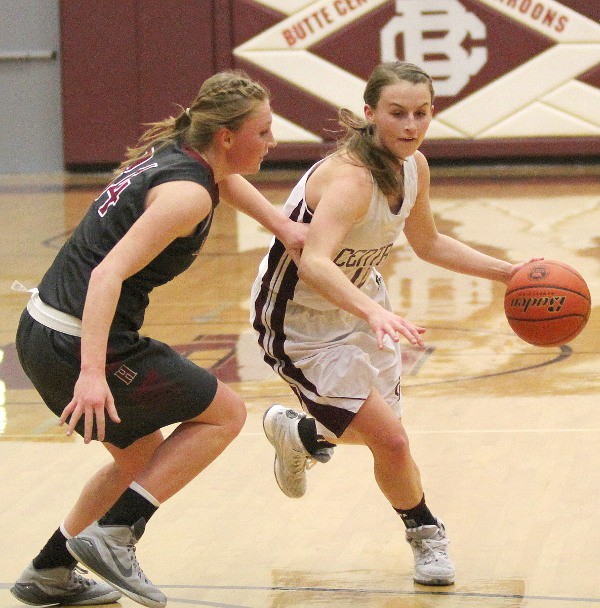 “Our inside game is much improved over the beginning of the season,” coach Murphy said. “Sierra had a great game.”

The 5-10 Pica played strong defense inside, too, and collected four rebounds, tying Thatcher for the second-team high behind Peoples’ six.

“Our defense was good, too — our 3-2 zone, the best it’s been, the best they’ve played it,” the coach continued. “Emily St. John is becoming a really good leader on the floor.” 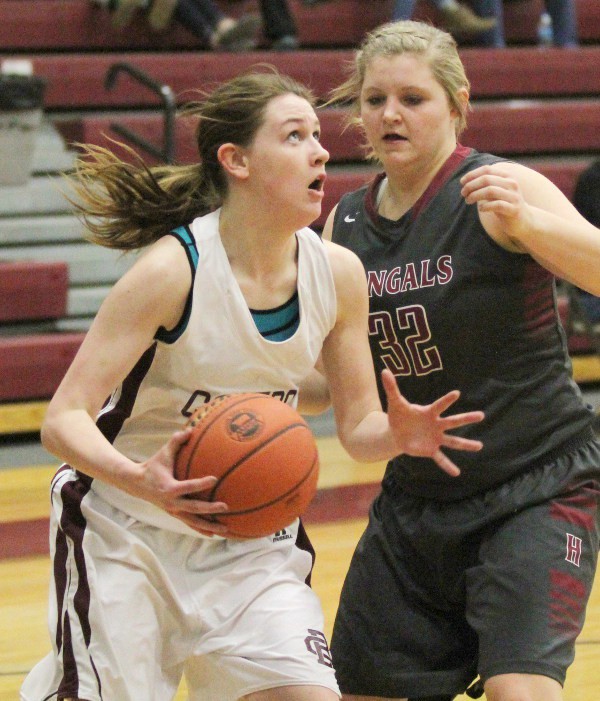 Butte Central shot a sparkling 51 percent from the field and sank 16 of 19 attempts from the foul line. Helena High was 9-for-13 from the free throw stripe and made 40 percent of its tries from the floor.

“I think we all really wanted to win this game,” Thatcher said. “When we’re all on the same page, I think we figure it will be a really good game for our team.”

Coach Murphy and Thatcher both said playing well against a good team such as the Bengals was a good experience.

“They’re a very good team,” Murphy said of the 7-2 Helena High club. “They’re athletic and they’re big and they’re quick. They will do well in the Double-A. Playing down like they did tonight can sometimes hurt because you don’t know what the play level is.”
Kloker finished with 16 points to pace Helena High. Crawford and Krantz put in eight each for next-most on the squad. Kamden Hilborn dealt six assists.

Butte Central will return to Southwestern A Conference play on Saturday with a road game at Corvallis.