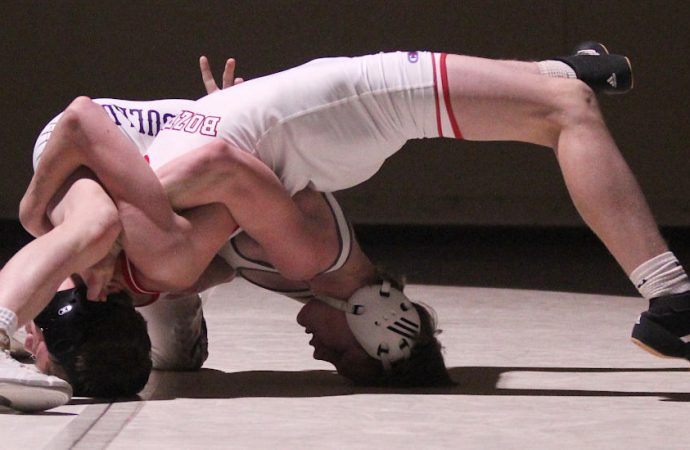 This week, Cory Johnston knows what his lineup is, for sure. Opponents of the Butte High Bulldogs do, too.

That hadn’t always been the case until the arrival of the postseason in high school wrestling.

Johnston, Butte High’s head coach, developed a reputation for last-minute changes to his Bulldog lineup prior to tournaments and actually during dual meets. Roster depth allowed such, he explained.

The depth is a reason Butte High qualified 19 wrestlers, 14 as top five seeds, for the state Class AA tournament set for Friday and Saturday at The Metra arena in Billings. It will be held alongside the state Class A and B-C tournaments in the building, the same as has been the case since 1989. (Click here to follow the brackets.)

Doors are to open at 8 a.m. on Friday, the Parade of Athletes is scheduled at 10 a.m. and wrestling is to begin at 10:20. All rounds are to begin with the 103-pound weight class until Saturday’s championship round, which is to begin at 132 pounds. The Saturday schedule starts with doors opening at 8 a.m., then wrestling (semifinals and consolation quarterfinals at 9:30. More consolations are slated for 11:30 and 1:30 before the 3:15 p.m. festivities bundle of Parade of Finalists, National Anthem and Championship Round.

Defending team champions are Bozeman in Class AA and two-time defending titlists Sidney in Class A, Colstrip in Class B and Circle in Class C.

Butte Central, coached by Robin Moodry, is represented in the State A by junior 285-pound limit weight class qualifier John Crossman, a junior. The Maroons were unable to even enter a wrestler in divisionals last year because of a rash of injuries, so didn’t advance anyone to the state A meet. Crossman placed seventh in the Western A Divisional held last week in Ronan.

Butte High figures to be a contender in Class AA with its 19 qualifiers. Great Falls High sent 20 while Bozeman, Kalispell Flathead and Billings Senior join the Bulldogs with 19 in the tourney. The large contingents stamp the five teams as the contenders for the championship.

“We did things a little differently,” Johnston said about maneuvering to get a large team entered. “We had a lot of depth this year and we plugged a lot of guys into matches. We picked places to get 10 AA matches for seeding purposes.”

Each wrestler needed to have been in at least 10 bouts against Class AA opponents in order to be considered for a favorable seeding position in the respective divisional tournaments.

“We had 20 guys with more than 10 varsity (Class AA) matches,” Johnston said.

The Butte High qualifiers include three past state place-winners, led by senior 205-pounder Kameron Moreno, the state champ at the same weight class last year. Junior Keagan Gransbery placed third at 103 pounds last year and is wrestling at 120 this year. Senior Kobe Moreno placed fourth at 170 pounds as a sophomore, missed last year because of a football-related knee injury, then came back this season to win the Western AA Divisional at the 285-pound limit class. He could likely be the smallest heavyweight in the tourney. He takes a 22-7 record into the state tourney as does his twin brother. Gransbery checks in at 20-8, according to the tournament brackets.

Other Bulldogs back in the state tournament after having wrestled there previously are senior Scout Allen at 138 pounds, junior Anthony Liva at 152, senior Quinn Sullivan at 160, junior Dominick Scown at 170 and senior Myles McClernan at 182.

Other Butte High qualifiers are brothers Trey and Reid Whitlock, a sophomore and a freshman, at 103 pounds, sophomores Cowhen Houchin and Kyler Raiha at 113, freshman Kip Pumnea at 120, junior Aidan Pezdark and sophomore Gavin Vetter at 126, sophomore Connor Konda at 132, senior Dylan Averyt at 160, sophomore Riley Downey at 170, and freshman Zach Tierney at heavyweight.

The Bulldogs lost two varsity wrestlers — freshman Mason Christian and senior Christian Sherman — to season-ending injuries during the course of the season. Sherman barely missed placing at state last year, losing to Gransbery in one of the tournament’s better matches in the consolation quarterfinals.

Pezdark and Downey both qualified for state as first-year wrestlers. Johnston said neither had any prior experience before coming out for the team this season.

Johnston said the 2019-20 Bulldogs won the most meets and most bouts of any in his four years at the helm. Simplifying the quest has been a theme in recent practices.

“It’s only a 15-team tournament,” the coach said. “We’ve wrestled in bigger tournaments as far as numbers of teams and individuals go. So, we tell the kids that if they could place at those tournaments, they can at this one. We tell them to do their jobs and the team takes care of itself.

“And, we’re only worried about the four mats we wrestle on.”

The Metra floor will have 12 mats on the floor – four each in the AA, A and B-C classes, in the earlier rounds.

“We shrink it down to put it in perspective for them,” Johnston said. “It’s good to be nervous, not good to be scared.”

He said Great Falls High, winner of The Jim Street Mining City Duals tournament last December, goes in as the favorite. He and his brother, Mark, the lead assistant coach for the Bulldogs, have been running mock tournaments based on results through the season and said that while Great Falls High emerges consistently as No. 1, four teams are never more than seven points apart in filling out the top five. That’s without surprises that seem to always occur at State.

Butte High is looking for its first state title since 2003. The Bulldogs have won 17 state crowns in their history, including 13 straight from 1980 through 1992.